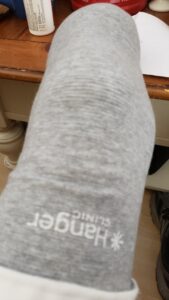 This was originally written yesterday 08.28.20 but due to technical problems could not be posted until today.

Its been a while since I last posted anything. My apologies for that. I just got caught up in the day to day things like work etc. Not to say I’m not happy working because I am but still sometimes in life you just get caught up in things and before you know it a bunch of time has passed.

Today I am writing because it has been a great day, a milestone of sorts. For over a year I have had more doctor appointments and hospital stays than the majority of people have in a lifetime and today I had two more appointments. Both went exactly how I wanted them to go.

First I went to an appointment at Hanger Clinic. I went hoping I would get a shrinker for my stump. I’ve had to wait for this because back in April when I fell I did damage to the stump that had to heal before I could get the shrinker. I’ll talk more about that in a bit but back to the shrinker.

So I went in with my son Lee’s help. After going through the check-in process, in which they pointed a new fangled contraption at my son and I, we were found to not have a fever and allowed to go to exam room 2.

A few minutes later Max came in and we talked a bit as he examined my stump. He then said well today you can leave here with a shrinker and not have to use rolled gauze and ace bandages anymore. That made me sooooooooo happy. Did I just say that made me happy? Well that’s an understatement. Before I could say anything Max went on to tell me the whole process of getting a prosthetic leg. in a nutshell I should be walking in six weeks. Now that made me even happier.

What is a shrinker you ask. Well it’s kind of a special sock that is made of a cloth and elastic combination. It puts pressure on your stump in order to prevent swelling and help shape and harden your stump so that your stump will be able to be fitted for a prosthetic.

With all the good news my son and I left and we were both smiling ear to ear.

We then went and got something to eat and then went to my next appointment with my surgeon. When my doctor came in he looked at my wound to see how it was healing. He poked at it a little made some small talk and finally stood up and said to the nurse pointing at a part of my stump, “Just put a bandaid over that.” He then said it’s just about healed you don’t need to put a dressing on it anymore. 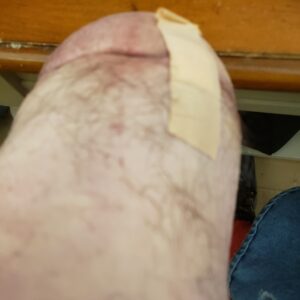 This was actually emotional for me. I have worked so hard to help it heal. Lots of protein. Keeping it clean. Packing the wound until it couldn’t be packed anymore. Doing everything the doctor told me to do and then some and now after close to four months with the help of my wife all I need us a bandaid. Yup, that’s right a bandaid. The run if the mill bandaid you can buy almost anywhere that run of the mill bandaids are sold. The doctor gave me the prescription for a K3 prosthetic which is a prosthetic that will allow me to walk at different speeds and stop short if I need to. I’ve been told with this type of prosthetic after I get use to it that when I’m out and about other people will not be able to tell I’m wearing a prosthetic. That was never my goal, I just wanted to be able to walk again but I’ll take it.

So all in all its been a great day thus far and I now have the weekend ahead of me. Life is what you make it and I can say life is good.

Just a heads up/ I will try to write more often. It’s something I actually enjoy and helps me process in my head the journey I am on.