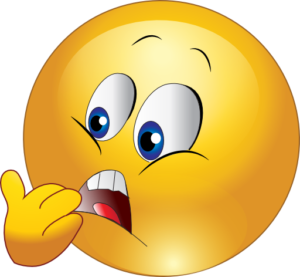 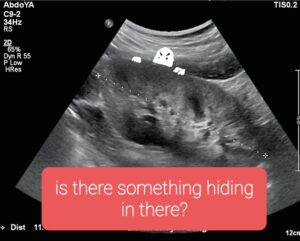 I went to the hospital yesterday for an ultrasound of my kidneys. I guess it went ok in the sense they did the ultrasound but I am now left with more questions and more fear than I had prior to going in for it.

I have bladder cancer. My urologist sent me in for a ultrasound of my kidneys. I am assuming because the kidneys and bladder are connected and he was doing his due diligence in checking my kidneys. He didn’t seem alarmed when he told me he was scheduling this. As a matter of fact it came across to me as though this is a routine thing to do and I am sure it is but ………..

So I am lying there on the exam table, all set to get this ultrasound. As I always do with medical professionals I jokingly ask the technician if she is any good at giving ultrasounds. Does she know what she is doing? She responded “I think so, I’ve been doing it for over 10 years now.” And she smiled.

So I am laying there and she puts the gel on my abdomen and starts moving the transducer around my abdomen. I am thinking to myself that is not where my kidneys are. That is where my bladder is. I don’t say anything because I figure it can’t hurt to do the ultrasound of the bladder too. After about 10 minutes she stops and tells me that she is now going to do the kidneys. She will start with my right kidney and that she is now going to apply the gel. I have had ultrasounds before and it always makes me laugh when they tell you they are about to apply the gel. They make it sound like it’s going to hurt when we all know it doesn’t.

So she put the gel on and began poking around. Then she asked me to take a deep breath and hold it so I did but instead of holding it for about ten seconds she had me hold it for much longer and I mean much, probably thirty to forty five seconds. She did this about twice as many times as the right kidney and each time I would hold my breath for at least thirty seconds and up to a minute once. (I was counting in my head.) At this point between the looks on her face that went from happy face on the right side to what the hell am I looking at on the left side, the fact that she was taking so much longer on my left kidney than my right and having me hold my breath longer I was beginning to worry. Did she see something abnormal? Was she getting a better picture because of the stent going up to my left kidney from my bladder? I don’t know and I didn’t ask. It has been my experience the techs will never tell you anything anyway. They will just refer you to your doctor.

On a side note, I have decided that even though I am horrible when it comes to playing poker that I could take the money of any tech that performs ultrasounds, MRI’s and cat scans. They have no poker face, they almost always give away what they are thinking even though they don’t say a word. 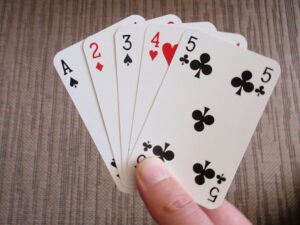 So off I go to my next appointment which is about a mile away. I had some time before I went in so I was sitting in the parking lot drinking a coffee playing on my phone. I was trying not to think about the ultrasound but I couldn’t help myself. I really wanted to know why when doing the left kidney it took twice as long and she made me hold my breath much longer.

I kept wondering, was it because of the stent? Was it because I have cancer in my kidney and she could see it on the screen? Was it because she was just having a harder time imaging that kidney? I would have to wait until Monday when I see my Urologist again to know the answer. I went to my appointments and finally returned home but I couldn’t stop thinking about the ultrasound.

Upon my arrival home my wife Sharon and son Lee were sitting in the living room. I came in and immediately sat down to take my prosthetic off. I had been wearing it a lot longer than I normally do and my stump was beginning to sink into the socket making it a little uncomfortable. After removing my prosthetic my wife asked me how thigs went. I told her about my appointments and then told her that I was a little worried about the ultrasound and explained why. She immediately told me I should call my doctor to get the results to which I was like he doesn’t have them yet. Radiology Doctor will look at them first and report back to my doctor with his findings. I spent the rest of the day taking a nap so that I wouldn’t think about the ultrasound. It didn’t work.

My wife, GOD bless her soul for putting up with me is a nag. There I said it. I love her with all my heart but at times (most of the time) she can be such a nag. I can’t get mad about it as she is usually right. But still it can be annoying when one is actively practicing the art of procrastination which I am good at when I want to be. But back to my wife. She kept telling me to call my doctor tomorrow (today) to get the results of the ultrasound. I was like I’ll find out on Monday. This wasn’t good enough for Sharon. So in true nagging form it began. She kept binging it up.  I finally escaped by going to bed thinking she did what she could and that was that. The truth is I didn’t want to call because I was afraid of getting more bad news. I figured I have had enough bad news for one year and I could wait until the new year to get more.

This morning I woke up. I get up early. I have my routine. Wake up, make coffee sit in my chair and play on my phone for a bit. Most mornings I sit out in the living room by myself. I like it. I have time for myself. This morning Sharon came out made herself some hot chocolate and asked me if I was going to cal the doctor today. After about a half an hour of her relentless nagging I finally caved and promised her I would call the doctor.

At eight thirty this morning I called the doctor. I told the nurse I would greatly appreciate it if the doctor could call me back with the results of the ultrasound. She to;d me the doctor was out for the rest of the week.This was very welcome news to my ears. She then said she would still send a message to the doctor with my request. To be honest I did not think he would call me back. I figured it’s new years eve week. He took the rest of the week off probably to be with his family and I could wait until Monday to get the news. I was happy with that.

I worked al day and at five o’clock this evening I logged out and decided to go to the store. I was on my way to the store when me phone rang. I saw the number and it was the number the hospital uses when they are calling out to people so I answered. Lo and behold it was my doctor and he was calling to let me know the results. I had a little knot in my stomach as he began to give me the results. Basically in a nut shell my Kidneys are fine. As much as I thought they weren’t I was so happy to hear this as I totally thought my kidneys were screwed. But nope. I have happy kidneys.

I usually have great spidey senses. But last week i wasn’t worried about the biopsy when it turns out i have cancer and this week I’m worried about my kidneys when they are just fine. Go figure.

right now I am gonna end this post with this. at this moment there is a certain somebody in my house taking victory laps and saying “Aren’t you glad I got you to call? Well aren’t you?” The answer to that is yes but I am not sure I want to admit that quite yet m