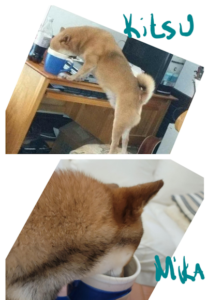 This post has nothing to do with amputations other than my dogs have helped me weather the storm.

I love dogs, all kinds of dogs. They are one of the best gifts god has given humanity. I particularly love Shiba Inus. Alot of people have never heard of this breed but they are an awesome breed. They hail from Japan and were originally used as hunting dogs. Hunters use to use them to hunt wild boar in the mountains. Because of their size they could easily get under the brush and keep a boar at bay until the hunter came along. To look at a Shiba Inu you wouldn’t think they were up to the task but they are.

This is a picture of Mika, our newest Shiba. We got her recently after our oldest Kitsu went off to puppy heaven. She is about 6 months old. A little bit about the breed, From Wikipedia:

The dog has a spirited boldness and is fiercely proud with a good nature and a feeling of artlessness. The Shiba is able to move quickly with nimble, elastic steps.

The Shiba is a relatively fastidious breed and feels the need to maintain itself in a clean state. They can often be seen licking their paws and legs, much as cats do. They generally go out of their way to keep their coats clean. Because of their fastidious and proud nature, Shiba puppies are easy to housebreak and in many cases will housebreak themselves. Having their owner simply place them outside after meal times and naps is generally enough to teach the Shiba the appropriate method of toileting.

A distinguishing characteristic of the breed is the so-called “shiba scream”. When sufficiently provoked or unhappy, the dog will produce a loud, high-pitched scream. This can occur when attempting to handle the dog in a way that it deems unacceptable. The animal may also emit a very similar sound during periods of great joy, such as the return of the owner after an extended absence, or the arrival of a favored human guest.

Back to why I am writing this post. Since Kitsu passed away I began to notice that Suki began to display characteristics that she hadn’t had before. These characteristics were some of the same that Kitsu had.

Kitsu was all about the food. Human food, not the daily dog food. Yes he would eat his kibble but what Kitsu enjoyed most in life was human food. He was never aggressive about it. He was patient. He would just take a sitting position near the coffee table and stare at whatever was on your plate. On a lucky day my wife or I would cave in and let him have some of whatever we were eating. With me it was usually because I was full and didn’t want to eat anymore. Not so much with my wife though.

It probably didn’t help that on all the holidays when we would have a big meal like the Turkey dinners at Thanksgiving with all the fixings, Sharon would always make a plate for both Kitsu and Suki. Yup, a plate and a big plate with everything we humans were eating. But here is the thing, as much as Suki liked human food too, she never did the sit doan and stare at the food game. If you just happened to give her some she was more than happy to eat it but she never expected it or tried to get it. That is until Kitsu died.

Suki now does the sit down and stare routine. This has only happened since Kitsu went away. The other thing about Kitsu was he had no food aggressions whatsoever when it came to regular dog food. It was common to see both Kitsu and Suki eating the kibble at the same time together but when it came to treats it was a different story. In his mind treats were for him and him only. So much so we had to give Kitsu and Suki treats i separate rooms. Suki was always willing to share but not Kitsi. This is a trait that Suki did not have. At least not until Mika showed up. Now Suki has the attitude that the treats are hers and hers alone. She gets very protective of treats and we now have to separate her from Mika when giving treats.

Another thing about Kitsu. He loved everything human including candy and cookies. I once left a package of Oreos on the coffee table. i had only eaten 4 cookies. when I came back into the living room hours later I see Kitsu lying on the couch napping with a torn up package of Oreos and they are all gone. He had himself a party.

Kitsu also loved coffee. As a friend of mine said on Facebook these dogs don’t need caffeine. Then comes Mika and I noticed that she too had some of the unique characteristics and behaviors that Kitsu had and yesterday it happened. Yesterday while I was out and about going to my doctor appointments my wife Sharon send me a picture of Mika. I couldn’t believe what I was looking at. I was laughing as it was funny. There was Mika drinking coffee from my mug that I had not finished and left out on the table. In the picture below you can see Kitsu with his head in my mug from 6 years ago drinking coffee and not caring who is watching.. Below him you can see Mika doing eactly the same thing and its the same mug even!

I’m beginning to think Kitsu has possessed Suki and Mika! I miss Kitsu, he was my little buddy and I am daily reminded of him through the actions of Suki amd Mika.