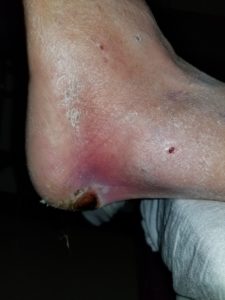 Before I get to the day that scared the crap out of me let me give you a little background information.

Early July of 2019 I had pulled a muscle in my lower left back. The pain was debilitating and going to work was killing me. But because of my upbringing I went to work religiously every day. As the month progressed I found myself alternating between Tylenol and Motrin to try and contain the pain. The pain won the battle daily but I kept going to work.

About three weeks in my left foot began to bother me but I just figured I was probably walking on it funny due to the back pain. I never looked at it. (BIG MISTAKE). I believe it was the last Friday of the month. I got home and told my wife I was going to bed for the weekend to try and help my back pain. I promptly plopped myself in bed and stayed there until Monday morning.

Monday morning came and I got up to take a shower and get ready for work. I went to take off my sock and that was when I went into panic mode. My whole left foot was red and purple and swollen to about twice the normal size. I also noticed a round dark spot on the left side by my heel. I called out to my wife and told her we had to go to the hospital. She ask why and I showed her my foot.

The reason I was in panic mode was because I had seen this before. Not on my foot but on my father’s. Because my father had waited too long to see a doctor when he finally did it was too late. The infection had already spread too far and so he was admitted to the hospital and they did a below the knee amputation. I was afraid the same was about to happen to me.

We arrived at the hospital and went into the emergency room. There was nobody in the waiting room so after going through registration it wasn’t long before they had me in a room and a doctor standing over me.  He asked me what brought me in that day and I just pointed at my foot.

The doctor looked at my foot and after about 5 minutes told me that it appeared I had the beginning of a diabetic foot ulcer. I asked what that meant and he said well we are going to hook you up to an IV with antibiotics. We will also do some x-rays and a cat scan to see just how far it has progressed into the foot. He then told me he would be back and that a nurse would be in to get the IV going.

I spent about 5 hours in the emergency room that morning. At the end the doctor scheduled an appointment with a podiatrist for a week later, prescribed some antibiotics and told me to soak my foot every night. I asked if my foot would need to be amputated and he said I doubt it. So I went home feeling better about the whole situation. I wasn’t going to be like my dad.

The reason this was one of the scariest days of my life was because I saw first hand what the amputation did to my dad. My father was a no nonsense kind of guy. Always very sure of himself. Knew what he wanted and just did it. He was a determined man and also complicated who held his feelings close to his chest. But after his amputation it changed him. I could see in his face the frustration and sadness as he struggled with his new reality. Many times I helped put him put on his prosthetic because he had a hard time putting it on tight enough. But the biggest thing that bothered me was he seemed to give up. He lost his determination, his fight for life and that is what scared me most. I didn’t want that happening to me.

Cool Blue Prosthetic Socks. The best on the Market

Get the best whey powder on the market

Workout from Home or While on the Road

We are still building the store. — no orders shall be fulfilled at this time. Dismiss