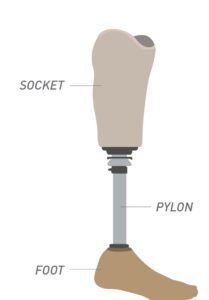 Today was the day I was suppose to pick up my new leg. The day I would win my independance from my wheel chair and walker. The day I could finally be able to come and go from my super handicap unfriendly condo building without needing help from anyone. The day I thought I would feel normal again. I am now sitting here like a little kid who only wanted one thing for Christmas, a baseball glove or video game console and after running to the living room to open the gifts found he got underwear, a couple shirts and gloves. His hopes dashed, he sits there and puts on a happy face while inside he just wants to break down, cry and die. So is my day today.

I shouldn’t be surprised. I knew that there was a good chance of this happening. I knew this because I have spent the last two weeks on the phone with my insurance company and my prosthetic people. I found out early that things weren’t going smoothly. I knew this because I had gone to my insurance website and did not see a claim for my prosthetic. So I called them. The woman I spoke with was very nice but apologetically assured me they had not received the claim yet. So I called the prosthetic people who told me they submitted the paperwork to their home office and the home office are the ones to submit it to the insurance company. I asked them to follow up with the home office to get the claim submitted. They assured me they would.

I gave it a week, I shouldn’t have but I did, and called the insurance company again. This time they told me they had received it. They received it on the 16th, it needed a correction and they received that on the 17th. I was told this on the 19th and was also told it takes up to 15 days to process a claim. I asked could they expedite it as my appointment to pick up the leg was Friday the 23rd. (Today). They told me that it could be but the request had to come from the prosthetic people. So I called them and told them what was going on and could they call the insurance company and get it expedited. I was told they would do that but the home office would be the ones to do it.

Yesterday, it was 4:30 in the afternoon. I hadn’t heard from the prosthetic people. My spirits were high as I had not received a call to reschedule my appointment. I felt like this was good. That things were all set. But no! At 4:30 I heard “Don’t fear the reaper” begin to play. That’s what I have as my ringer on my phone. I look at my phone and my heart sank. The number of the incoming call was the prosthetic people. I knew right then I was doomed and they were calling to reschedule.

Sure enough after answering the phone, a young woman gives me the bad news. I’ve had a lot of things happen to me in my lifetime. Things that would make most people crack but I didn’t. I’ve stood strong over the years and have overcome everything life has thrown at me. Yesterday, my whole body shook. I wanted to find the proverbial rock to crawl under. I wanted to scream. I wanted to bash someone’s head into a wall. I wanted to lash out against the world. Most of all I wanted to cry.

I don’t think most people understand the freedom they have because they still have both legs and feet. I don’t think most people understand how demoralizing it is to depend on others to help you do the simplest things. I have kept my chin up since April 11th. I have kept a positive attitude. I have taken good care of myself in order to heal. I have made great strides to regain my weight and muscle mass. I’ve gone from about a nine inch bicep to twelve and still working on getting back to normal. I almost died and I have been doing everything i can to turn things around so that I don’t become a statistic and die within the first two years after amputation. I have busted my butt!

But that call almost broke me. I wanted to give up.throw up my hands and give up. I stayed in bed until 1:00 pm today. I usually get up at 5 but today I just rolled over and slept.

I finally got up. Sat on my couch not knowing what to do with myself. I looked my guitar, thought about picking it up and playing some AC/DC. great music to play when you’re angry. But I didn’t. I didn’t because I’m not really angry as much as I am super disappointed to the 10th degree.

So there I sat wondering what to do with myself. I had to face reality. I know I will get my leg. It’s more a matter of when. I thought is there anything I can do to speed things up so I called my insurance company again to see where the claim stood. Once again I got a very nice woman on the phone. She looked into it for me she came back after about three minutes of being in hold. She began to explain the process to me, to which I politely told her I already knew. My question was did the prosthetic people call and escalate. She told they had called but only asked that the claim get high priority. She then said would you like me to call them and ask them to escalate this? I thought to myself well I guess there is a difference between high priority and escalation so I said if you don’t mind yes please. After a few holds and the woman talking to both my prosthetic people and the claims department she finally came back and told me that things should be approved by Monday and that the claims people do work over the weekend.

Can I say I am happy now? Well not 100% but it is definitely a step in the right direction. It also gives me a time frame to work with. So it seems I should have my new leg early next week.

This whole process has beaten me down though. And as much as I like my prosthetist, and I do, it’s the corporate part of his company I hate. I’m don’t know why he or the local office can’t have more control over the process. The people at my office are great and they do a good job but to have to run every little thing by their home office is insane.

So here I am still without a left leg, still feeling like that little boy who didn’t get what he wanted for Christmas. Hopefully, I will feel like that little boy later that Christmas morning because that boy was me and after everyone had opened their presents there was one gift left. My mom reached down picked it up,looked at the tag and then smiling said, “oh Jimmy,we overlooked one for you” and then handed it to me. It was the baseball glove and at that moment I felt like I was in top of the world. I’m sure I will feel the same when I walk out if the prosthetic office in my own wearing my new leg.

I’m still disappointed right now. But the phone call has given me boost. I just need to have patience. As the prayer goes…..