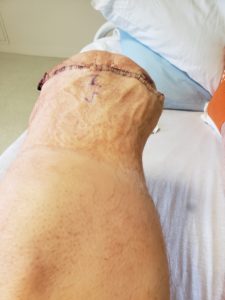 I love Pirate Movies. They’re alot of fun to watch. In my mind a pirate always has an eye patch. He also wears a three cornered hat with a skull and crossbones on the front. He wears flamboyant clothing, brandishes a sword and may have a hook for a hand. He has his own ship which he most likely stole that brandishes black sails with the skull and crossbones. He also has his parrot and of course a peg leg. Yup, he has been through hell and is an amputee. One thing though, the movies never show how the pirate was able to not only recover from the amputation but also was able to move on with his life of crime and live his life as though he had no handicap. I’m in the beginning stages of my recovery. Just six days in and already I know my journey is going to be tough. I know that at times I am going to want to give up and that at other times I will probably rejoice at some small milestone I am able to accomplish. I have a long road ahead of me and that road will have it’s ups and downs.

Last Saturday, April 11th, at about 10:00 AM I was administered anesthesia. I had both of my legs and feet. Hours later I awoke and I had just one foot. Part of the my left leg and my left foot were no longer there.

Obviously I knew this was going to happen but my reaction to looking down and not seeing my foot was not what I expected. I thought I would be sad. I thought I would be depressed beyond belief but I wasn’t. I was actually relieved and a part of me was happy because for the first time in eight months I felt like this was the first day in the rest of my life. I don’t expect you to understand that now but as I tell my story of how I got here I think you will understand.

As for Pirates, well I don’t have a ship nor do I have or need an eye patch. I am also not a flamboyant dresser and I don’t own a parrot. As a matter of fact I am pretty boring but I do hope I have a little pirate in me and I come out of the other side of this strong and not feeling like I have a handicap. That’s the goal.